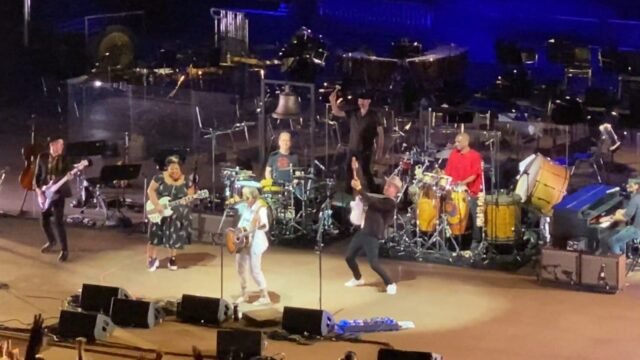 Brandi Carlile was joined by Celisse Henderson during Saturday’s concert at Red Rocks in Morrison, Colorado. The show was the first of two Carlile is performing with the Colorado Symphony at the scenic outdoor venue.

Alternating between keyboards and guitar, Carlile was accompanied by her several of her bandmates including guitarist Tim Hanseroth, bassist Phil Hanseroth, keyboardist Shooter Jennings and cellist Josh Neumann. The setlist featured a blend of favorites such as “The Story” and “Turpentine” with newer material, like the current single “Right On Time.” Carlile mixed in covers of Elton John and Joni Mitchell songs as well.

Celisse, who is a member of Trey Anastasio’s Ghosts Of The Forest, emerged during the latter half of last night’s show. The orchestra members left the stage ahead of the collaboration that began with Henderson adding guitar to Carlile’s “Raise Hell.” The sit-in continued with back-to-back The Highwomen songs, as Carlile brought out her bandmates Kyleen King and Nikki Shorts to help sing “Highwomen” and “Crowded Table.” The set concluded with Carlile leading her bandmates and the orchestra through “The Joke” and “Pride And Joy.”

Marking the 20th anniversary of 9/11, Carlile began the encore with a rendition of “The Star-Spangled Banner.” The show wrapped with “Party Of One,” “Hold Out Your Hand” and “This Time Tomorrow,” and a cover of Leonard Cohen’s “Hallelujah.”

Watch a portion of Celisse’s sit-in with Brandi last night at Red Rocks below: