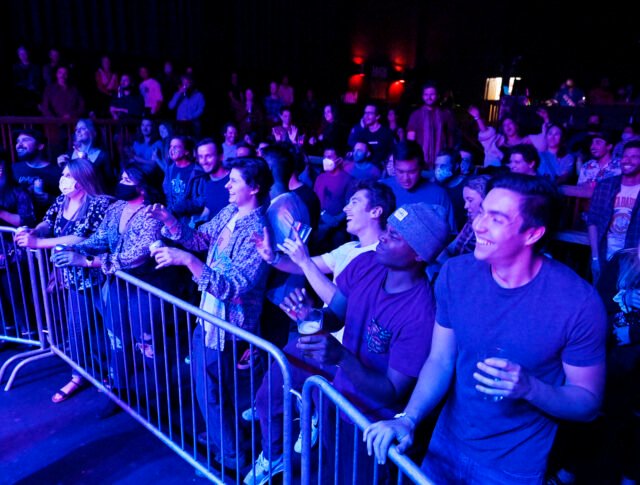 As a music fan and mother of two young boys, Erin Roberts has avoided concerts in recent weeks due to COVID concerns — especially in light of her vaccinated mother contracting a breakthrough case after seeing the Eagles at Ball Arena on Sept. 18.

While she can’t know for sure where her mother contracted the virus, Roberts said the large number of unmasked concertgoers led her to believe the show was the culprit.

“The current state of the industry is an absolute mess,” said Roberts, 44, whose Denver band Porlolo also has seen gigs canceled this fall over coronavirus concerns. “There’s no way to look ahead to anything with any certainty.”

Denver music fans have lately watched an unfortunate trend unfold as dozens of fall and winter concerts, whether recently announced or rescheduled from past dates, are being shelved again due to ongoing pandemic problems. Those include band and crew members testing positive for the virus, preemptive artist pull-outs over safety and mental health concerns, lax venues, shifting health mandates and labor shortages.

Meanwhile, fans have scrambled to secure refunds and reorganize their calendars. Big consumer wins — such as last month’s StubHub settlement in which the company paid $3 million to Colorado residents whose tickets were not refunded from last year — have been few and far between.

Heading into October, artists such as Stevie Nicks, Lucinda Williams, Gary Numan, Dispatch, Airborne Toxic Event, Kenny G, 070 Shake and Watsky had canceled or postponed Colorado concerts due to coronavirus concerns — in some cases, a day or two before the scheduled date. More continue to join them every week: On Oct. 16, touring band Midland canceled its Red Rocks gig due to “a positive test within the camp,” according to a publicist (the show is coming back Oct. 22, 2022).

Colorado acts such as comic-musician Ben Roy and jam band The String Cheese Incident also have canceled national dates due to COVID concerns — with outdoor String Cheese shows on July 16 and 18 at Red Rocks being the site of a COVID outbreak that infected at least 14 people, according to The Colorado Department of Public Health and Environment.

“I lost more than 50 booked concerts last year, but I ended up getting some of them back,” said Denver-based DJ Cyn, a.k.a. 41-year-old Cynthia Mardones, who not only tours nationally but books DJs in town.

In Colorado, concerts generate $2.1 billion, support 16,127 jobs and contribute $113 million in state and local taxes, according to a September report by Oxford Economics. But that system requires the constant circulation of dollars, and any blockage swiftly affects the related organs.

In the four months between April 1 and July 31, 2020, Colorado’s music industry lost 8,327 jobs and $344.6 million in sales revenue, according to a report from Denver Arts & Venues. Many players hung on with grants, loans and creative bookkeeping, as well as layoffs and furloughs, but a return to the concert-free days of 2020 would be the nail in the coffin, industry observers and experts say, with the global concert industry having lost $30 billion last year.

“My fear is that if fall and winter events are canceled this year, many of our independent venues will cease to exist,” said Chris Zacher, chairman of the Colorado Independent Venue Association, in August. “Arts and culture is the third-largest economic driver in the state. … When venues are shuttered or permanently closed, the trickle-down effect is devastating.”

“I don’t know that people are as ready to be at shows as they said they were,” said Ru Johnson, 37, an independent Denver promoter who specializes in hip-hop and other urban genres. “A lot of us really thought we’d be going to a concert every single night, but there’s some weird energy with people trying to re-enter the party society.”

Johnson, who is Black, also lamented the misinformation and conspiracy theories she’s seen in communities of color about vaccines and logistics for getting into shows. She worries that has depressed crowds at otherwise safe, welcoming events, including ones she has worked on, given that COVID outbreaks at concerts have been relatively rare.

“A lot of industry lot of people don’t even know the difference (in rules) between different promoters and venues,” she said. “I heard from one person that you have to be vaccinated to get into Ball Arena. I was like, ‘They don’t do (crap) there. I walked right in with a margarita.’ ”

Andy Cross, The Denver PostConcert goers watch the Brasstracks band perform at the Fox Theater in Boulder on Oct. 06, 2021.

By contrast, concertgoers can’t even get into the lobby at the AEG Presents venue Mission Ballroom without showing a COVID vaccination card — a rule that went into effect on Oct. 1, just as other promoters, venues and bands such as Dead & Co. began announcing similar measures for their Colorado concerts.

Representatives for mega-promoter Live Nation, which operates in Denver, did not respond to requests for comment. AEG Presents Rocky Mountains, the regional behemoth that books most Red Rocks shows, declined to make officials available comment.

While experts and analysts have been cautiously optimistic about live music’s return, they’ve been tight-lipped with predictions, having been burned by COVID so many times over the past 18 months. As with most fans and artists, their hope is that rising vaccination rates will make outbreaks — and, eventually, all COVID concerns — a thing of the past.

“I’m planning to see (Denver singer-songwriter) Nathaniel Rateliff’s show in December, and I have tickets to the War on Drugs in February, so I’m excited about going to those,” Roberts said. “Unless I’m sick.”

Subscribe to our weekly newsletter, In The Know, to get entertainment news sent straight to your inbox.