Immortals Fenyx Rising takes place on The Golden Isle, a land of the gods that is divided into individual zones, each dedicated to seven of the Greek deities. These biomes all have their own unique artistic approach and story to tell, which provides a variety of contrasting locales for Fenyx to journey through.

To learn more about these seven areas, we spoke to game director Scott Phillips and art director Thierry Dansereau, who provided some insight into the creation of The Golden Isle.
Clashing Rocks (Hermes) 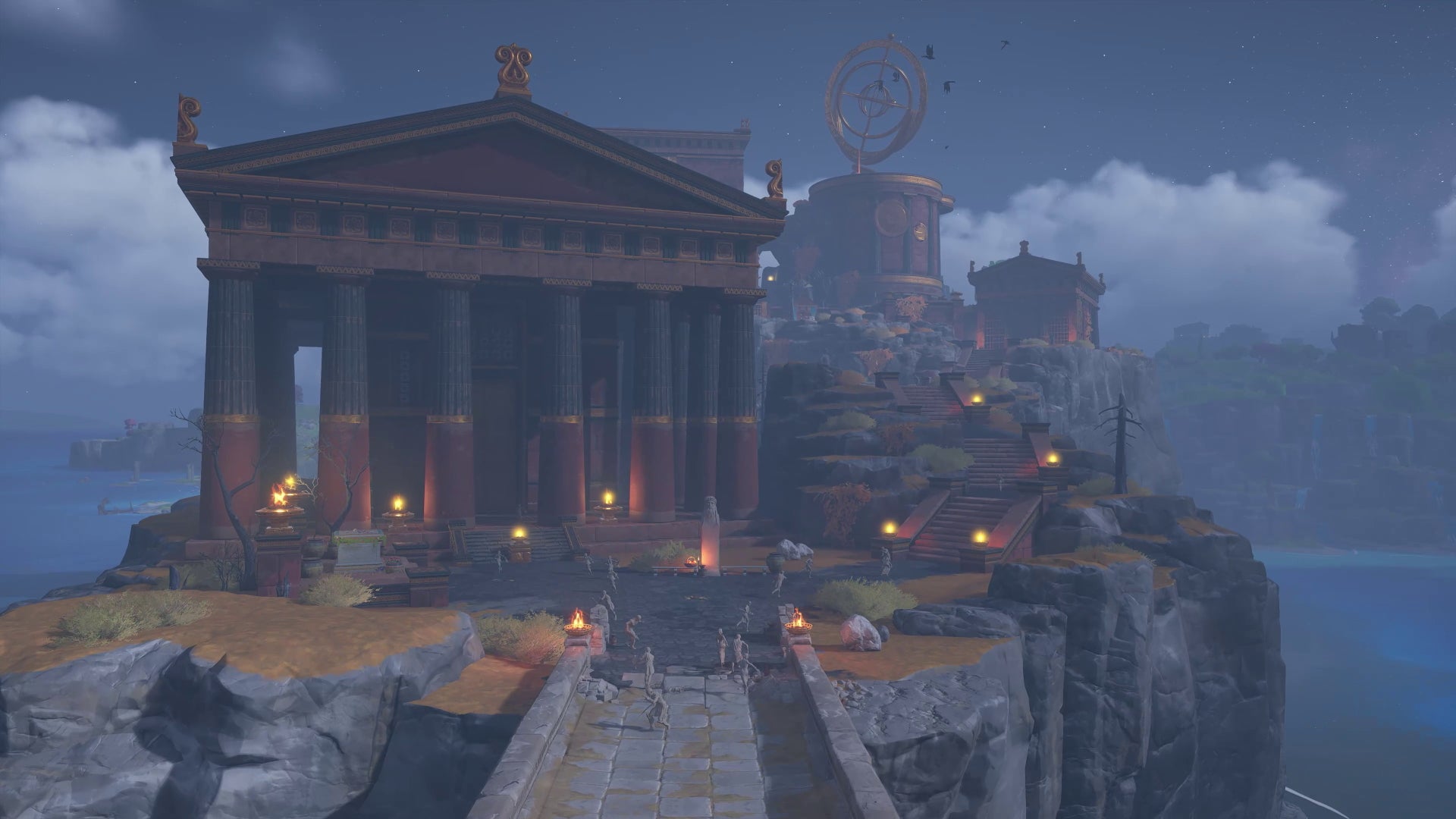 Scott Phillips: Hermes’ area is where Fenyx starts this journey. You wash up there after a shipwreck and you get to customize your character, and then you’re sort of introduced slowly to the state of the world, why is Hermes there, where are the rest of the gods, what’s happening. Early on you’ll see that this area seems sort of devastated.

Thierry Dansereau: What we wanted to do to support that side was to create a visual that looks like it has been devastated and that the battle against Typhon has been lost.

Phillips: You get to explore this region a little bit, and you meet Hermes. Hermes tells you that you are a focus of a prophecy that says that you’re going to restore the gods and help them to defeat Typhon.

So, it’s a relatively straightforward journey that you make in Hermes’ area, Clashing Rocks, because it’s sort of the tutorial area of the game, where we want to give you all of the tools. Introduce you how to use each of them, and then we set you free in the world after that to go free and do whatever you’d like to do.

Dansereau: We’ve decided to make sure to build this first isle land like a very desolate waste… to truly support your sense of progression and also to create a big reveal with the upcoming region, that is Aphrodite’s zone.
Valley of Eternal Spring (Aphrodite) 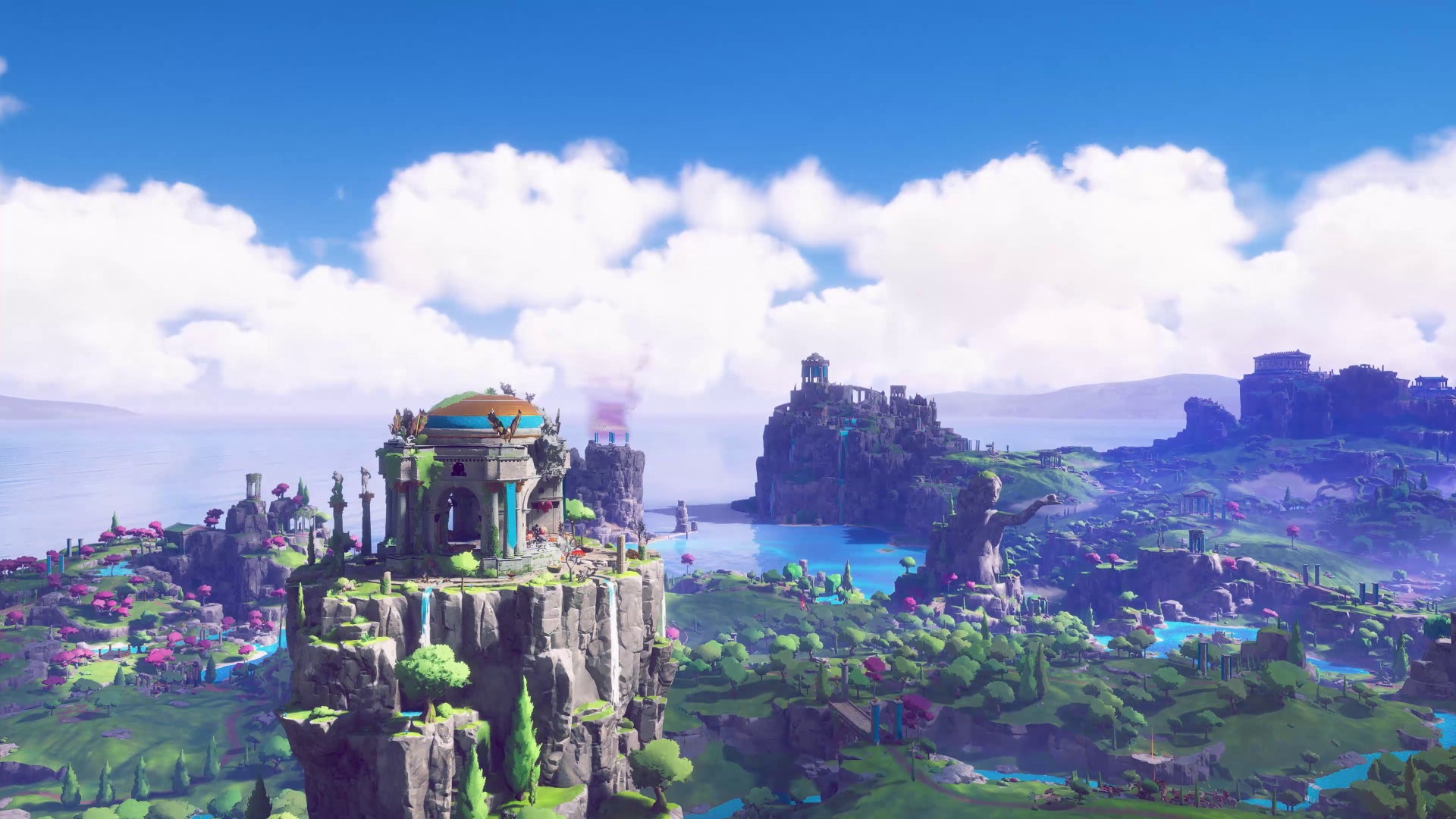 Phillips: Aphrodite’s area is probably the first place you’re going to go because it’s where the Hall of the Gods is. This is where you’ll do all of your upgrading and customizing, it’s also where the gods will gather once you’ve saved them. It’s sort of your hub, your home base.

Dansereau: Aphrodite, she’s the goddess of love. We wanted to embrace that aspect of her by embracing nature, flowers, colors, lakes of water. It’s calm, there’s ponds, flowers, petals all over the place. We have a forest and giant fruits. Even the architecture style is Ionic style, which is very round and feminine shapes, iconic columns. Everything is dressed with vegetation and flowers. It’s our lushest region I would say.

We discovered on Odyssey that people love colors. It makes you feel well and it’s a feel good game where you want to be in there. You just want to travel and explore the area. It’s not always oppressing and very overcast. So we did embrace that. Those big white clouds and big bright blue skies.
War’s Den (Ares) 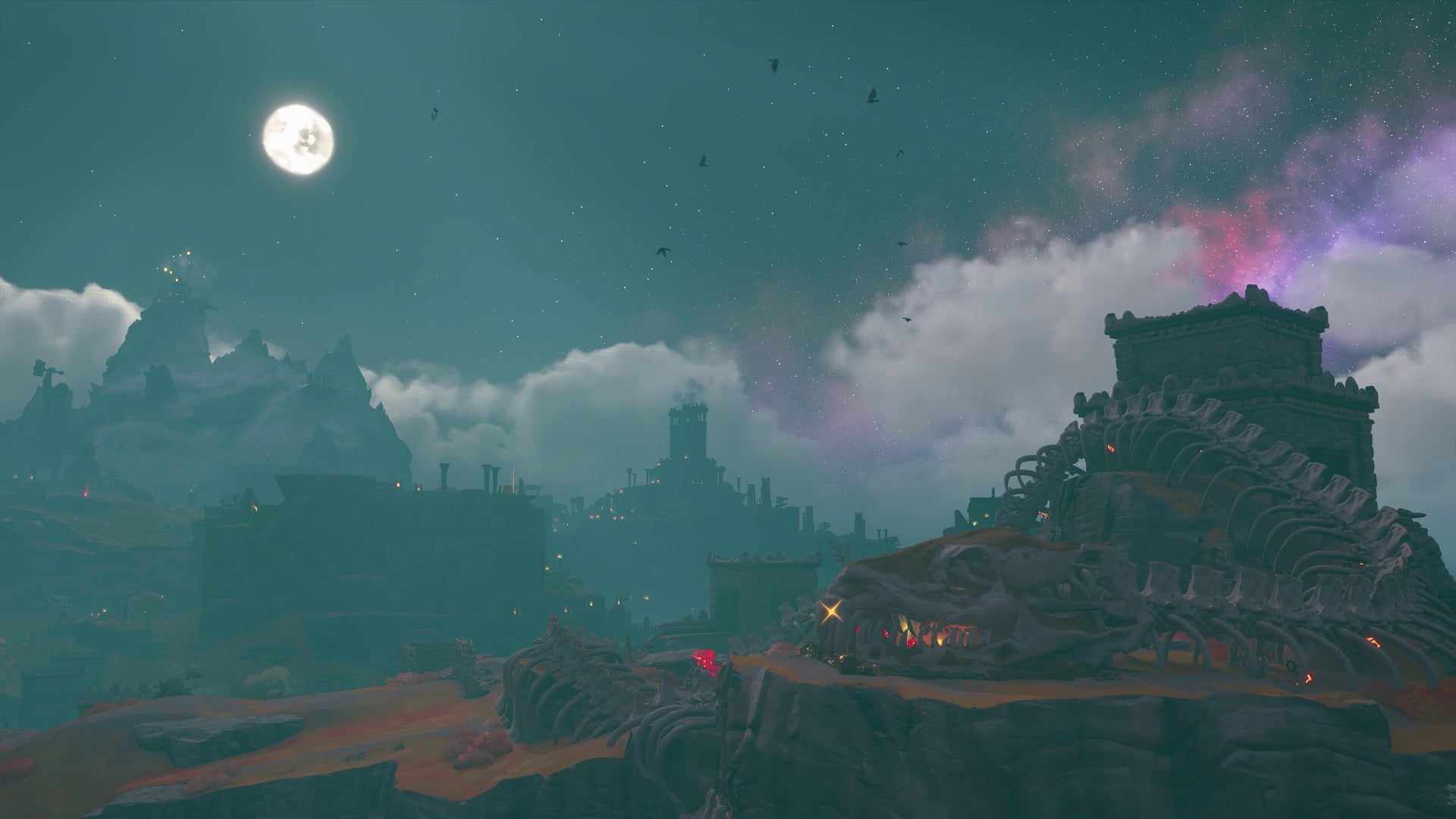 Dansereau: Ares is the god of war, so that’s why we embrace the red biome. When you think of Ares, you think of war, Mars, red, blood.

Phillips: Ares’ area is essentially a big battle zone. There’s defeated titans that have been frozen in place. It’s sort of a big pockmarked terrain. Things have been burned down and destroyed.

There’s also one of the most unique visual locations in the world: his fortress. This is a big, epic journey that you’ll go on, from the entrance of the fortress to get to the end of the fortress, which is where you’ll have a fight and a Vault of Tartaros.

Dansereau: We used the Macedonian architecture style, which is an old Greek style that was a very war-oriented type of [design]. Because they did fight a lot, and if you go to Greece, you’ll see a lot of those ancient fortresses that are using those architectural styles.
Grove of Kleos (Athena) 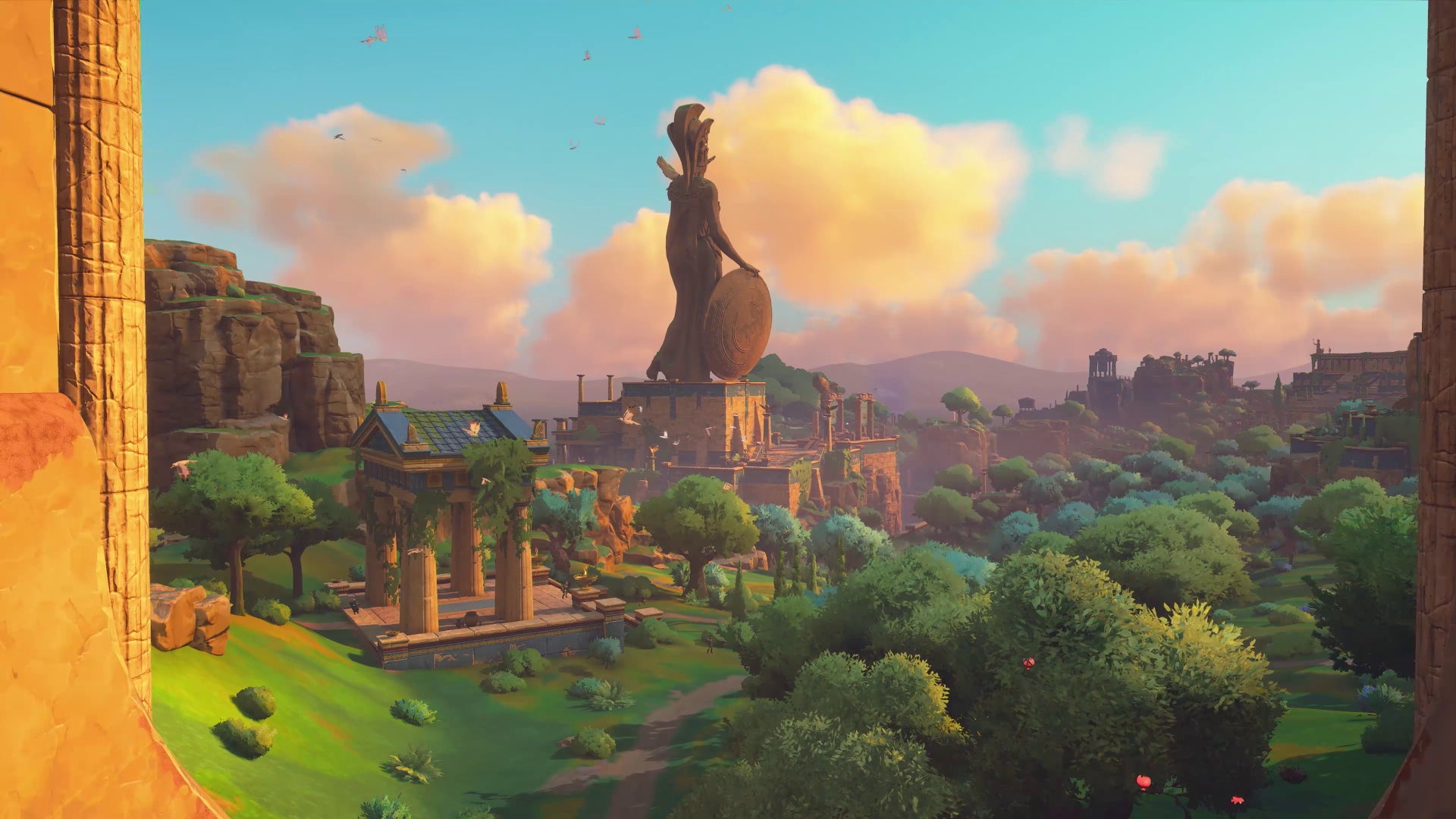 Phillips: So Athena’s areas, she’s sort of the most iconically Greek in her area. The visual style, the palaces, the temples, all the columns. It really feels like the most visually similar [area] to the Assassin’s Creed Odyssey style.

Dansereau: We know from the Greek mythology that Athena was the most involved with the humans. That’s why in that region is where you’ll see the most classical Greek architecture style of all the regions. So there’s a lot of temples all over the place and the statue of Athena. And also there’s human farms and lots of olive trees, because one of the symbols of Athena is olives.

There’s several places you’ll cross there where there’s a lot of very heavy references and interactions with things that reference Herakles, or ‘Hercules’ as most people know him, and Odysseus, and Atalanta. This is the area where you’re going to feel the most classical Greek.
The Forgelands (Hephaistos) 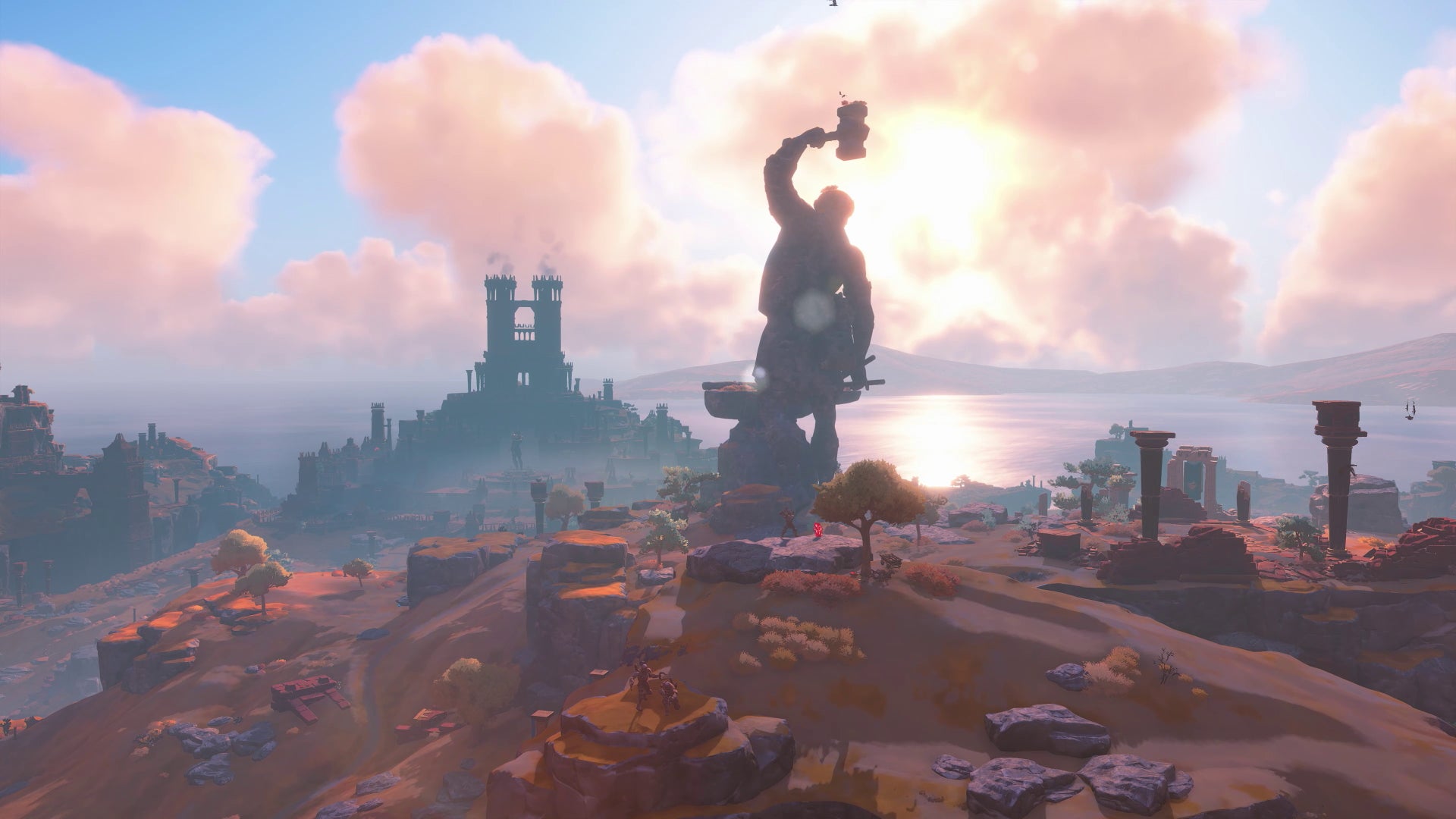 Phillips: The Forgelands are the home of Hephaistos and Hephaistos’ forge. It’s sort of barren. It’s been stripped of all trees, of all minerals and resources in order to feed this forge where Hephaestus creates his inventions, namely the automatons that you’ll see sort of frozen in place throughout the world as they were stopped by Typhon.

Dansereau: Surrounding the forge, there’s the fan, the aqueduct, the burned forest, the mine. So all those elements are sub-regions, but are there to create some sort of a story line where [Hephaistos] needed resources to build his craft. So he built facilities around his area.

The challenge was to create things that look modern but still ancient, that look credible in a way. But this is where the fantasy part of our game did allow us to go a bit wild and do things that would not make any sense in the Assassin’s Creed games.
King’s Peak (Zeus) 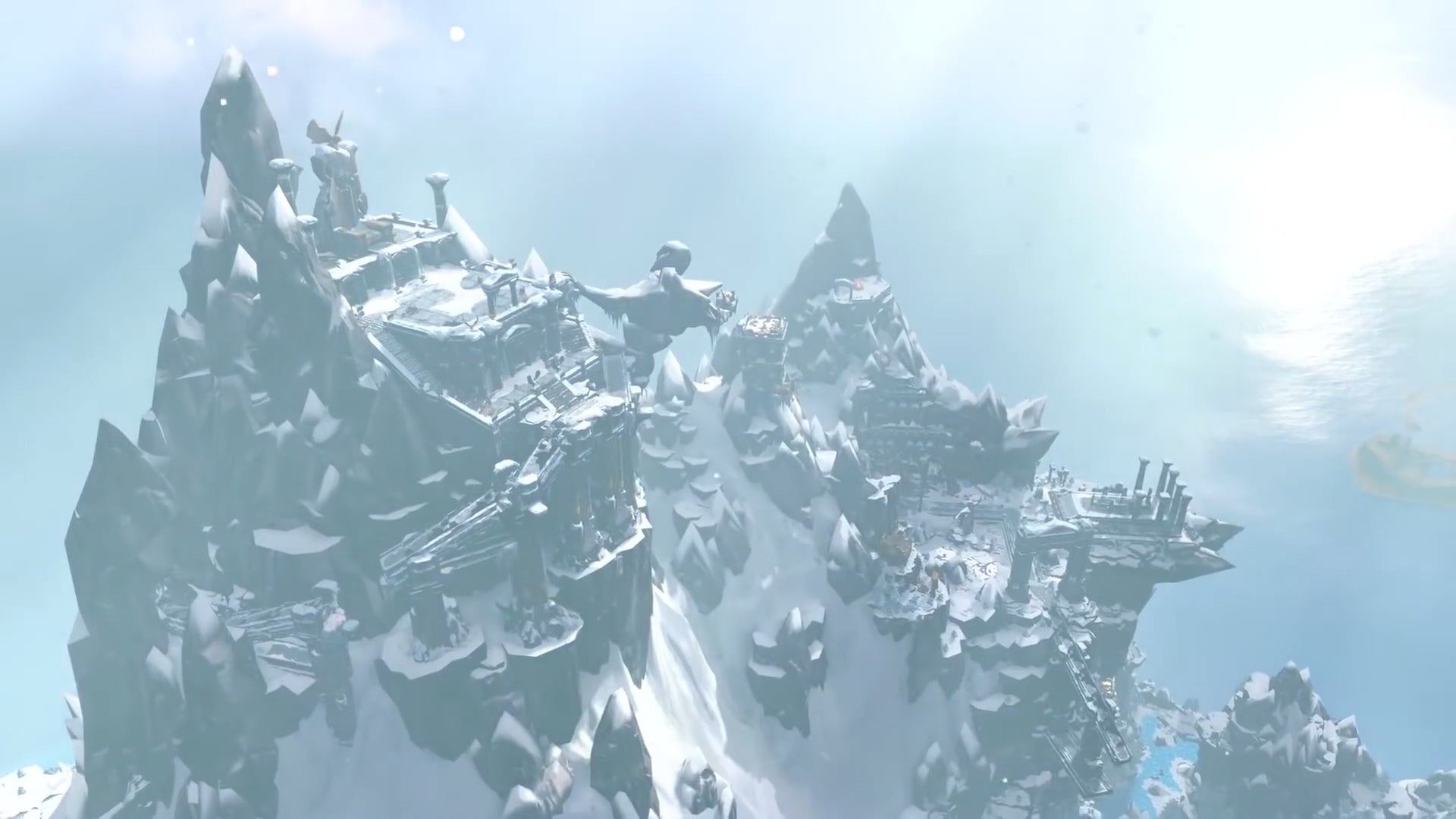 Phillips: You can always see Zeus’ mountain in the distance. You’ll go there towards the end of the game, and we really wanted this to feel like just a super, epic journey. You’re trying to make your way up, but it’s not a clear path. So, you’re sort of figuring your way out and figuring your way up.

Dansereau: It’s an ascension, so we wanted to convey the feeling that you need to climb on top of the mountain to be able to reach Zeus. It’s going to be hard, it’s going to be tough, the weather will be against you. So it will require lots of your skills… There’s tons of challenge. It requires pretty much all of what you’ve learned during your journey to be able to reach the summit.

Phillips: It feels like the end of the game, because we meant it to be this sort of epic journey that really befits the king of the gods.

Dansereau: It’s a snowy biome, so there are ‘Christmas’ trees, and then the further you go up, the trees start to be replaced by giant rocks and ice.
Gates of Tartaros (Typhon) 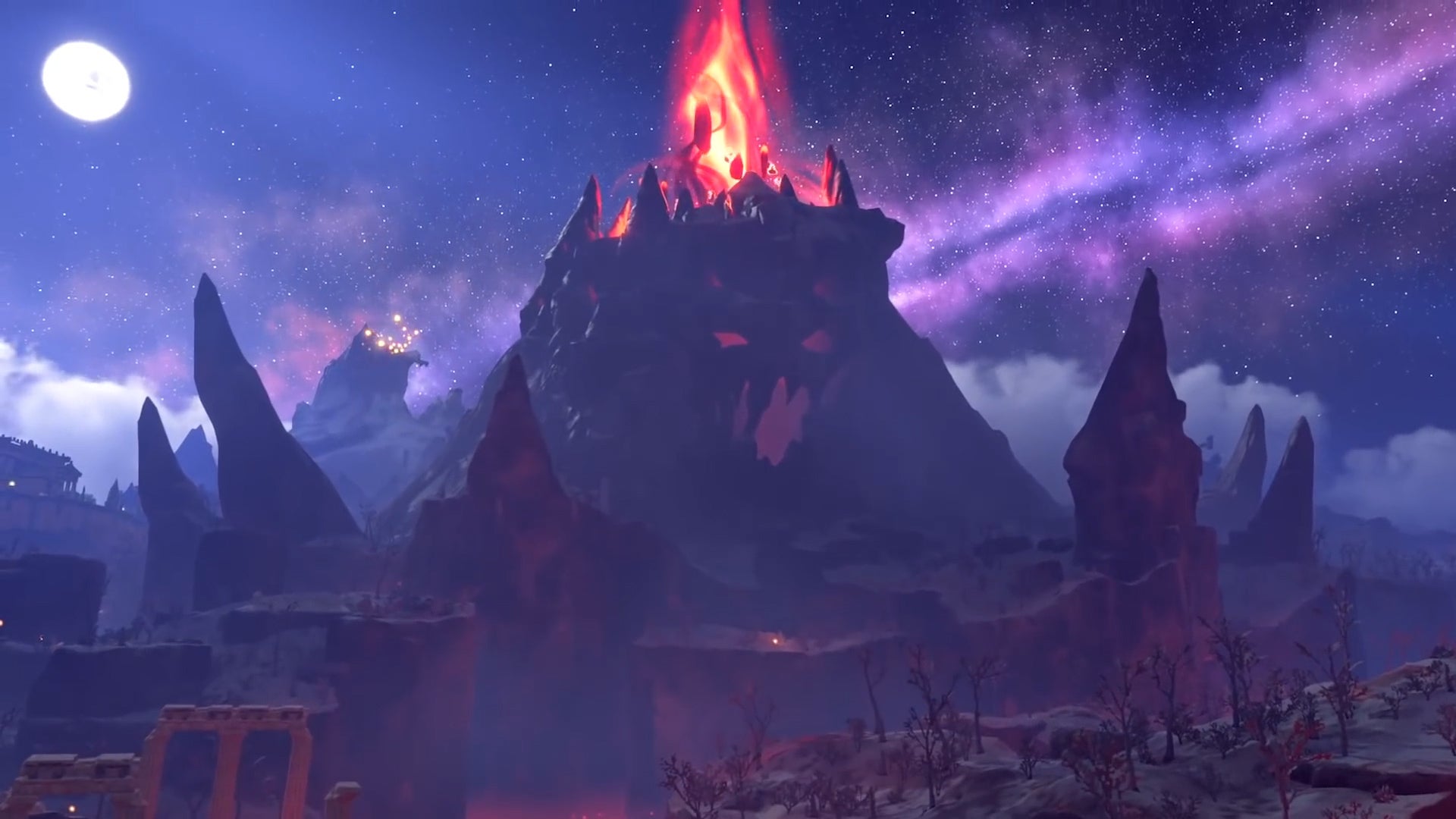 Dansereau: So this is the central point of the map, so you’re always seeing it from pretty much everywhere.

Phillips: We wanted that to be a source of fear. When you’re traveling and you see the mountain come alive, the volcano come alive, and you know that there’s going to be an event.

Dansereau: We thought, ‘Okay, since it’s a fantasy game, why not try to put some hint of his face within the mountains,’ so you kind of see his eyes and his mouth.

Phillips: Typhon is going to rage and cause something to come hunting you. There’s a variety of things that can happen, but we wanted [the mountain] to be something that you would look to and sort of fear until you’re closer to the end of the game, when you know like, ‘Okay, this is where I’m going to go, and this is how I’m going to complete the journey, by defeating Typhon.’

Dansereau: It’s very hostile. When you go there, there’s another entrance that’s triggered that goes very dark and oppressive. There’s electrical magical shocks all over the place. It looks pretty apocalyptic in my opinion.

That was important for us because Typhon is the thing that you’ll see all the time. It’s the ultimate villain that you’ll need to defeat later on, so it’s kind of always a thing that you’re seeing that’s your final call… If you have a strong villain, that will define your hero. So being able to see Typhon manifestation often in your play through, kind of reminds you that there’s a villain.

For more from Immortals, check out our chat with Scott Phillips about the game’s journey from AC Odyssey to Gods and Monsters to now, and our in-depth look at how the team built the Vault of Tartoros puzzle dungeons. You can also check out our hands-on preview. Check back later this week, too, as IGN First has even more exclusive interviews and details about Immortals Fenyx Rising still to come.