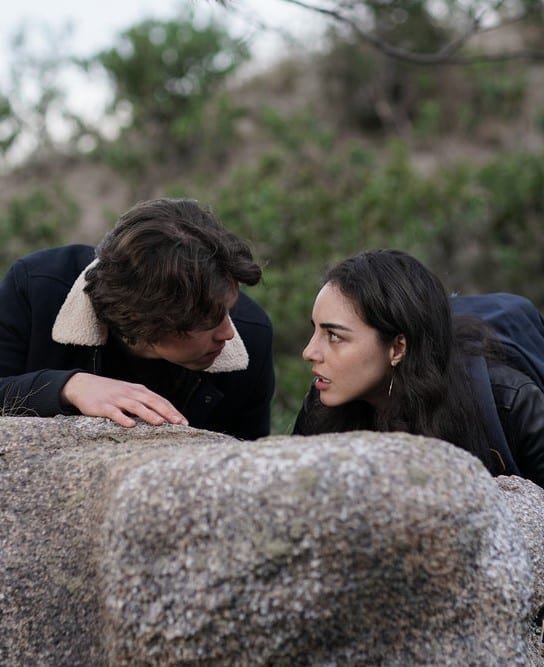 Was anyone else crying buckets?

La Brea Season 1 Episode 5 was one of the most emotional episodes of the season. It connected survivors from different sinkholes together, and it explained the urgency of a rescue mission.

Let’s discuss how so many people were connected and how our emotions went on an emotional rollercoaster.

Soon after the group entered the mysterious fort, the pieces started falling into place, connecting Eddie’s death. Eve and Levi saw a hut with the red handprint on it.

They entered the hut and saw Eddie buried with a stone handprint around him. It looked just like the one Veronica saw around her dad in La Brea Season 1 Episode 2. He probably wasn’t killed by a wolf after all. Levi recognized this man.

It’s more than a mission, Eve. It was more than finding the people of the La Brea sinkhole. I was also sent here to find this man and seven others.

Permalink: It’s more than a mission, Eve. It was more than finding the people of the La Brea sinkhole. I…

Eddie was one of the scientists on the team sent to rescue those from the Mohave desert sinkhole. Levi’s radar picked up Eddie’s walkie-talkie. Suddenly, Eve found a recent fire and realized they weren’t alone in the village.

Eve tried to gather the rest of the troops, but it was no easy task, and the group soon realized what strengths and weaknesses they possessed.

As soon as Eve and Levi spotted Josh and Riley, some angry men with arrow spears started chasing them, and the four of them got separated.

Riley wanted to keep running, and Josh wanted to return and rescue his mom.

It was a new side of Riley. She’s usually the confident queen bee that has attention from at least three different men. Instead, now, she was falling apart and needed Josh to stay calm and in control.

She seemed so scared as they hid behind the rocks from those angry men. As soon as they were free, she wanted to escape, but Josh refused, reminding Riley that she got mad when Eve left without Sam before.

Josh: I never took you as someone who was scared of anything. You operated on your dad. You saved his life. That’s who I need right now.Riley: Okay. I’m in.

Permalink: I never took you as someone who was scared of anything.

When the two of them were fighting over Lucas’s drugs, one of those angry men used that to his advantage and grabbed Lucas in a chokehold and began beating him up.

Scott stood frozen in fear and wouldn’t even grab Lucas’s gun. More of the men entered with the spears and tied Lucas and Scott up. They saw another dead man.

We need to get out of here before we end up like him.

Permalink: We need to get out of here before we end up like him.

At first, Scott and Lucas appeared to have an exciting frenemy vibe, but Lucas enjoyed holding stuff over Scott’s head, and it was evident that Scott was growing weary of it. He even tried to negotiate a deal with him before he untied him.

Scott lost his patience and finally stood up to Lucas, so hopefully, now that’s not bowing down to him, we can move on.

If you really want to kill me, go for it. I’m serious, just get it over with since I’m sick and tired of being your little bitch.

Permalink: If you really want to kill me, go for it. I’m serious, just get it over with since I’m sick…

Thankfully, Josh didn’t put up with Lucas’s nonsense either and made sure they waited for Eve and Levi, who discovered some crucial details. The two of them encountered the children of the village.

Once they reassured the kids they weren’t trying to steal anything, one of them showed how to escape.

As the entire group was about to exit, they ran into the old man with the handprint.

They can connect him to the other deaths, but what are his reasons? Is he angry more people are invading his space? Is he connected to Lilly?

Chiké Okonkwo shined in this episode as a child therapist that only wanted the best for Lilly.

Back home, he used play therapy and games to get children to open up to him. Since those items were lacking in the sinkhole, Sam suggested hosting a softball game.

Ty became confused about Lilly’s homelife since she shared her dad helped coach her softball team back home and practiced with her often. However, he had just learned from Veronica that Mr. Castillo was strict and never wanted his daughters to talk to strangers.

Veronica seemed almost softer as she said she wanted to follow in her dad’s footsteps and protect Lilly, but there was something off. These different versions didn’t make sense.

It was evident Lilly was hiding something, but no one expected what she revealed to Ty in tears.

She wasn’t Veronica’s sister. They abducted her a year ago.

That poor child has been traumatized over and over and only trusted Ty with the truth. Hopefully, he can find a way to protect her and reunite her with her birth father someday.

Eddie wasn’t the only one down there. Dr. Nathan lost her fiance Diana to the Mohave desert sinkhole, too, showing why this mission is so important. However, Izzy is still terrified of losing her father on this mission.

Izzy: Dad, you never said anything about flying down there yourself.Gavin: Iz, I wish there was another way, but this may be our only chance to get mom and Josh back.Izzy: And what if none of you come back?

Permalink: And what if none of you come back?

This episode highlighted the strength of Gavin and Izzy’s relationship.  Gavin meant it when he offered not to go the sinkhole if his daughter was uncomfortable, but Izzy couldn’t deal with the responsibility or guilt of not saving their family.

These two are very much alike and each other’s strength which is why Rebecca hesitated to show them the letter she found from Eve.

In the letter, Eve was saying goodbye. She told her husband and daughter that she loved them, knew that Gavin’s visions were real and that the light was closing in less than five days.

If the light closed, Gavin might not make it back to LA.  He looked so tortured about never seeing Izzy again. He wanted to save Eve and Josh but didn’t want to leave Izzy.

She was the one person who’d always believed in him, so he didn’t want her to feel abandoned or be without family.

That dilemma made me cry.

Over to you, TV Fanatics. How will Gavin choose between saving his family and leaving his daughter? Were you shocked to learn Lilly isn’t related to Veronica? Chime in below in the comments.

Did you miss the episode? Remember, you can watch La Brea online right here via TV Fanatic.