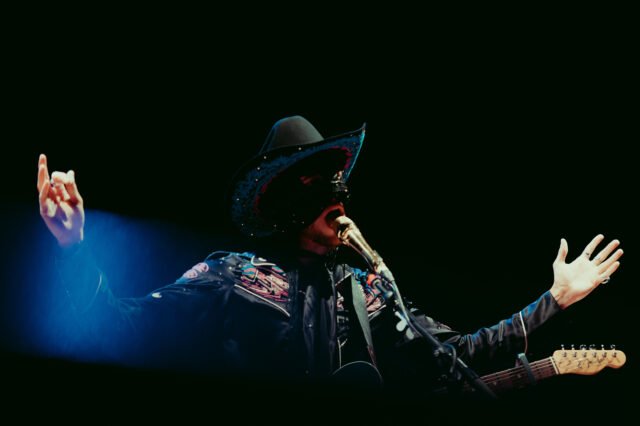 There was no shortage of dust kicked up on the way into Red Rocks on Thursday night, and we’re not talking about the cars. Event staff in neon yellow and green vests wrangled hoards of literal rhinestone cowboys and cowgirls into the amphitheater.  Elaborate boots clacked up the inclines providing a beat to the ironical city slicked side talk filling the air, as a technicolor assemblage of hats colored the landscape. Par the course of the night’s headliner, the mysteriously flamboyant country crooner, Orville Peck — the majority of people fit the script and shone like the star of the evening, even behind a cubic zirconia front. Rodeo on the Rocks was the cause for commotion, a lineup headed by Peck featuring some of country music’s brightest new and emerging faces including English singer/songwriter Yola, and outlaw country bad boy Charley Crockett and hosted by none other than actor and director John Waters. For a genre that has long felt exclusionary, Rodeo on the Rocks broke through the frontier of the conventional country connotation to deliver something everyone could partake in. 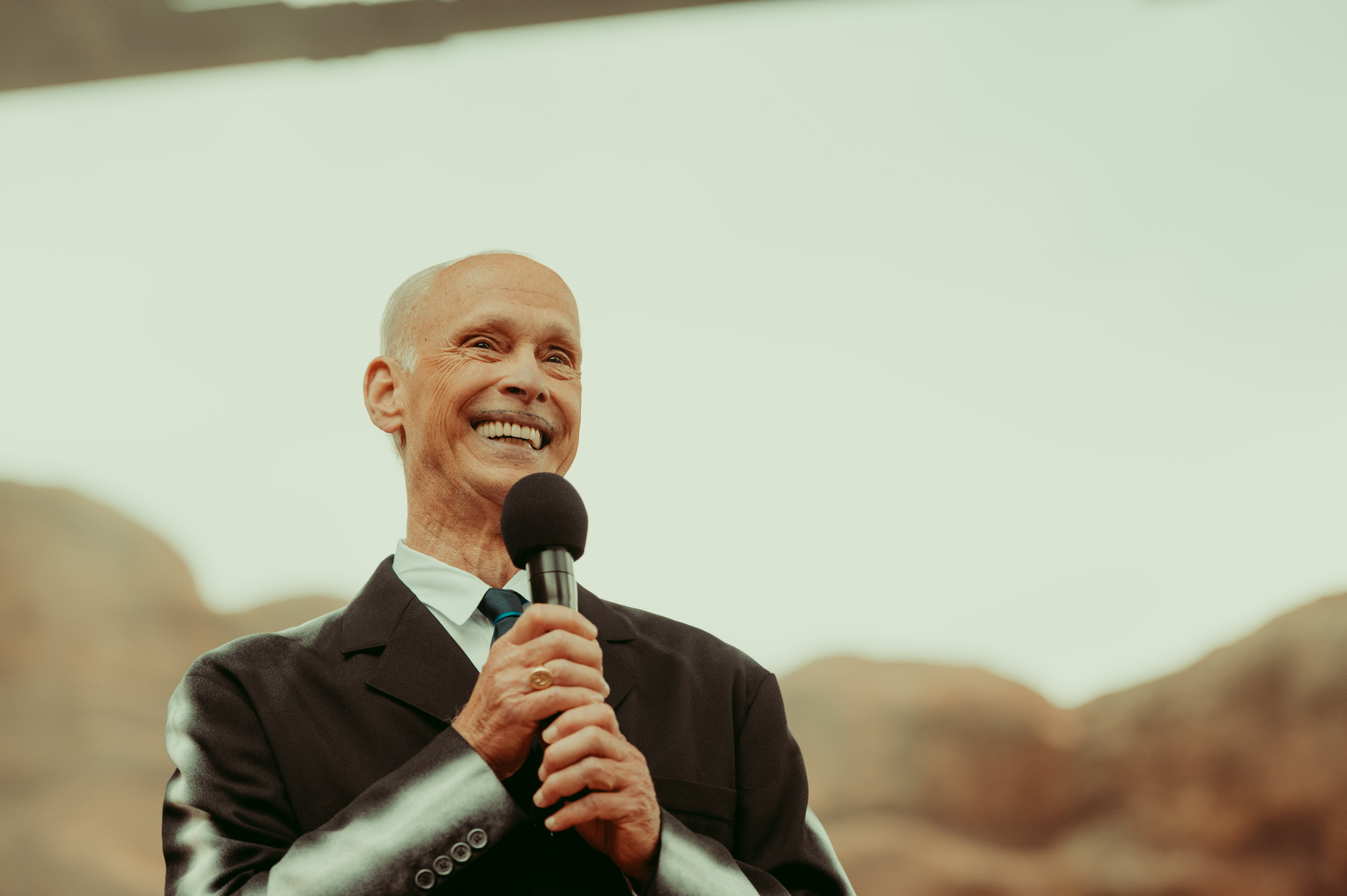 Hitting the stage to cheers, the ever-iconic John Waters dropped no shortage of compliments and accolades as he introduced Texas’ own Charley Crockett. The thing about Charley Crockett is he embodies that southern saloon singer to a T. Everything from his sharp suit to the cock of his hat, and the way he arms his guitar high and tight as if he were aiming his frets to “catch a body,” all with a cocaine white smile, screamed of an age of outlaw country that was more criminal mischief than country crooning, and it worked. With his attitude and the accompaniment of his immaculate backing band, Charley Crockett set the show off firing on all pistons atop his soulfully southern tunes. Belting his song and juking it out, it was a treat to have such a showman peel back the curtains of the show. Opening duties didn’t phase Crockett at all, as he promised the audience that if they weren’t going home a fan this time, he’d put in the work to seal the deal on the next go-round, and quite frankly, it was hard not to believe him. 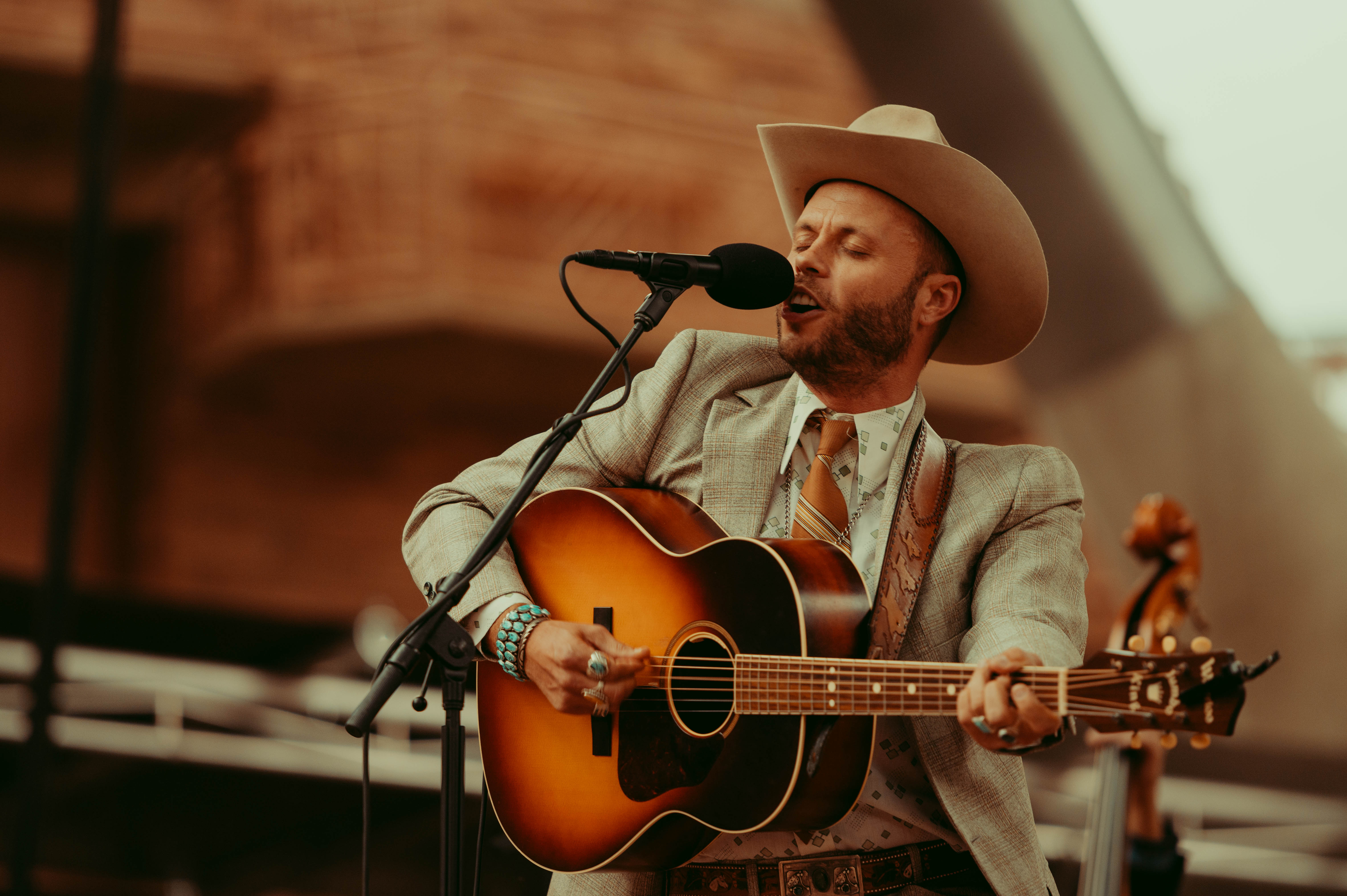 The good times kept rolling as Yola took the stage following Charley Crockett’s knockout performance. As Waters mentioned whilst introducing her, “big girls don’t cry, they wail,” and wail, Yola certainly did and then some. The country newcomer by way of Bristol, England possesses one of those strikingly powerful soul-filled voices akin to Aretha Franklin, Janis Joplin and Jennifer Hudson. Don’t call her an R&B singer though, because Yola is a country gal through and through. Not relying on over-the-top theatrics or intricate outfits, Yola let her voice and guitar do the talking. Backed her impenetrable band, Yola effortlessly sent chills through the crowd pushing her robust voice through the emotional apexes of her songs like “Starlight” and “Diamond Studded Shoes” — even an incredibly impassioned version of Elton John’s “Goodbye Yellow Brick Road.” A longtime backup singer for many artists in the UK, Yola stepping out on her own at Red Rocks was a moment of triumph, as she held the near-capacity crowd hostage with her arresting vocals. Ending her set with “Stand For Myself,” Yola had the entire audience standing for her. 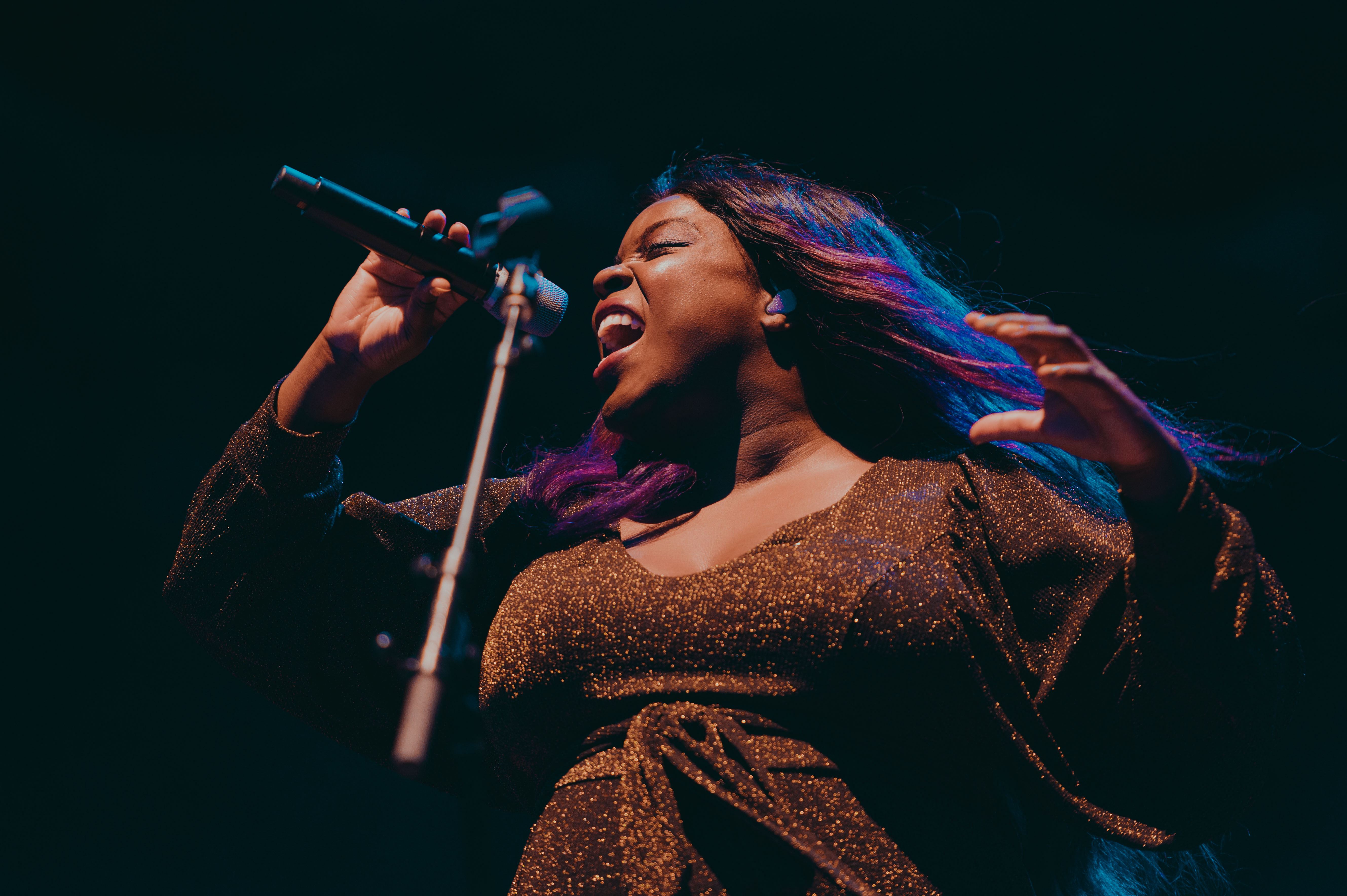 Following a brief stage transition, Orville Peck, the man of the hour arrived at the stage. Donning customized leather pants with Red Rocks iconography sketched into them, a dazzlingly royal blue and black cowboy hat and his signature mask with fringe pulled taut to the sides, Orville Peck didn’t come to mess around. Knowing he had a lot to live up to following Crockett and Yola, Peck created his own lane, purring with his sweet baritone voice letting the music spill out over the rocks. Peck, also an entertainer worked the crowd and invited them into his curious world of country folklore performing much of 2019’s Pony and his 2020 EP, Show Pony. As much the audience had dressed the part, Peck played into it, cutting up a rug with his guitar and spreading bravado as if he’d happened upon an oil slick. Peck even invited both Crockett and Yola in for duets, the latter of which version of “Islands in the Stream” originally by Dolly Parton and Kenny Rogers was both campy and killer in its execution. 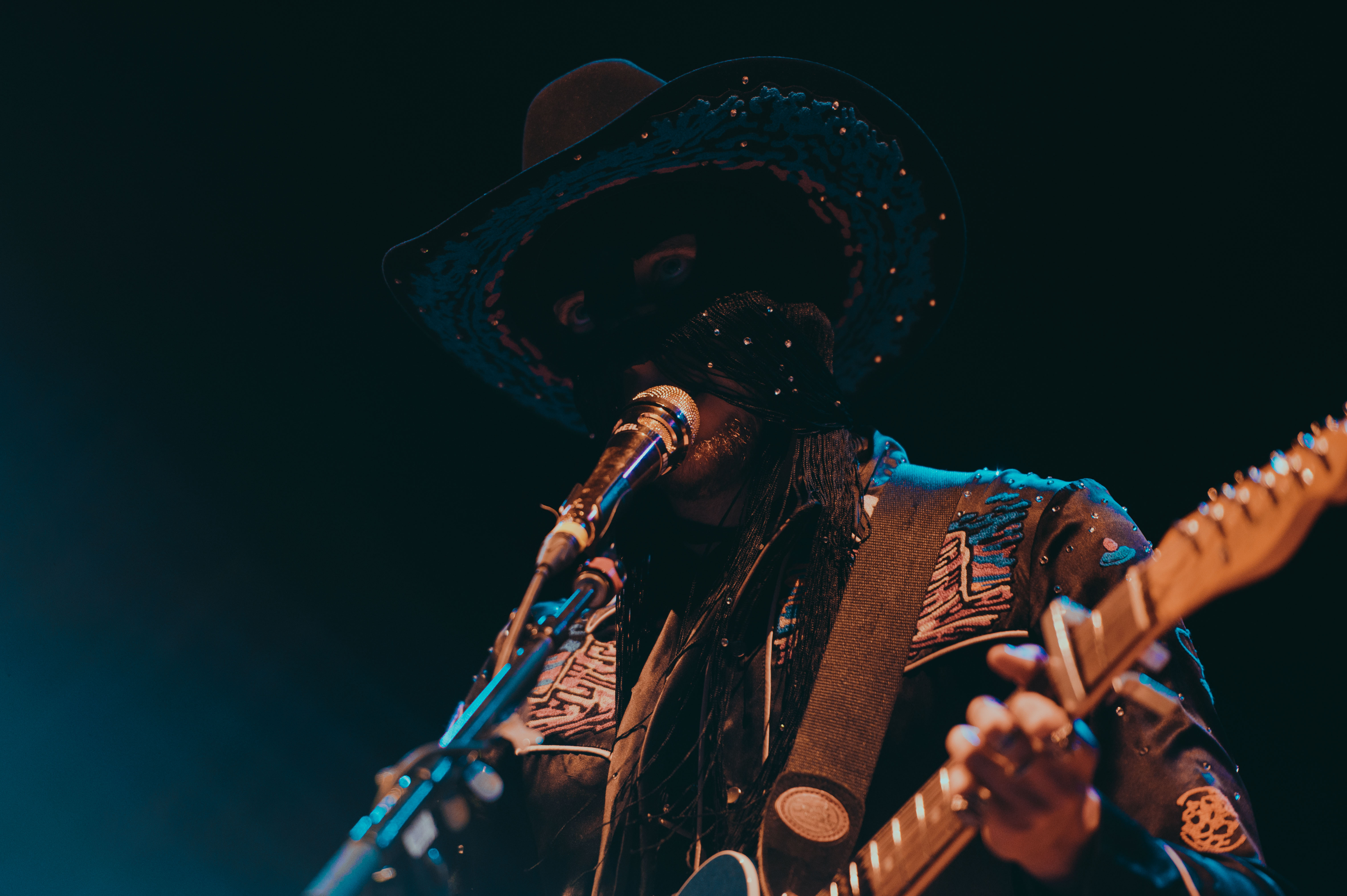 Ultimately, Peck tied the knot on a sense of community and place within the country sphere for all those who subscribe to his and his company’s misfit brand of the genre. The whole night was a rodeo where everyone got to ride to the sound of their own harmonica, to watch a group of musicians breathes fresh life in what many saw as a genre with limitations on participating as one’s true self. This rodeo was all about bucking the trends and embracing that next wave in all its glory.

All photography by Alden Bonecutter courtesy of AEG.