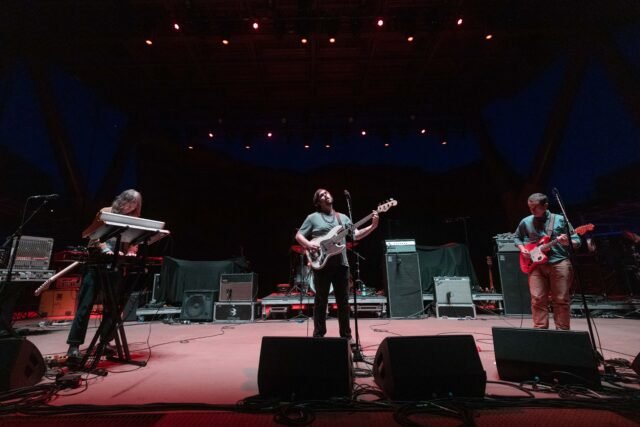 Nothing matches the effort it takes to see a show at Red Rocks Amphitheatre. It’s the ultimate reward after navigating and trekking the steep inclines of the famed venue. There’s no other venue like it, so it’s no wonder why it’s a milestone for musicians. You’d have to be extremely fortunate to get to the stage without putting in years of hard work. After last night’s performance, it’s clear to see how much Portugal. the Man deserved to be on that stage.

It’s one thing to put on an extraordinary set as the closer, but it’s a different experience for the opener. The situation can go sour quickly if the band doesn’t deliver — but, this wasn’t the case for the night’s opener, Parquet Courts. The new-wave, punk-influenced band, which formed in 2010, set the tone for the night with quippy lyrics infused with a rebellious attitude that is at the forefront of the genre. Looking at their discography, t’s no wonder Portugal. The Man chose this particular band to open for them at such a revered venue. Up until 2018, the band released an album every year for six consecutive years dating back to 2013. With a work ethic that dedicated, a new album has to be in the works. For now, fans will have to wait, even more anxiously after their opening performance.

Not long after Parquet Court’s set, Portugal. the Man appeared with a message of intention and gratitude. The band, which started their own non-profit foundation called Portugal. The Man Foundation — highlights the stories of Indigenous Peoples, while giving them a voice and platform to speak on issues affecting their communities. Before playing, the band introduced, Stronghold Society “a non-profit organization that advocates for skateboarding with a focus on creating and sustaining skateparks in Native American communities.”

Various members of the non-profit — all who were members of Indigenous communities, reminded the audience how special the land shared with the venue is and how it should not only be enjoyed but respected by everyone. Shortly after a brief music circle, the Stronghold Society members stepped to the side but not away, joining the band with their own instruments and providing an ensemble of 14 performers.

With that many people on stage, coordination and communication must be impeccable. Despite claims of disorganization in their communication byway of bassist and singer, Zachary Carothers, the 14-person band was astounding. Not only that but their light show was incredibly meticulous as they played. That said, there was no shortage of authenticity and creativity in the band’s set. Likewise, there were few interruptions or conversations. Whether you were a first-time listener or long-time fan, Portugal. the Man went out of their way to make their audience feel comfortable. After all, who doesn’t know a Metallica, Slayer or Nirvana song?

The group started their set with music made by those previously mentioned and continued covers throughout the night. From The Beatles’ “Hey, Jude” to Charlie Kelly’s “The Dayman” the changes and smooth transitions kept the crowd on their toes, leaving many die-hards curious about what they’d play next. “Modern Jesus” turned to “Moonage Daydream” while “Brick in the Wall” blended into “Purple Yellow Red and Blue” and “Atomic Man” shifted into a timely cover of The Rolling Stones’ “Gimme Shelter.” You couldn’t dream of a more exciting set from one band.

When all was said and done, many will try, but few will prevail as successfully as Portugal. The Man. With poetic lyrics, killer music and a desire to put themselves behind a meaningful cause, it’s nothing short of a mistake to  miss Portugal. the Man when they come to town.

All Photography by David Cohn