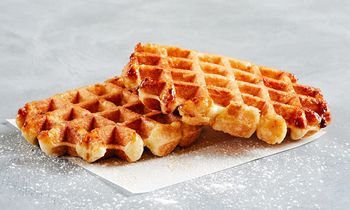 New York, NY  (RestaurantNews.com)  Wafels & Dinges, a New York City institution known for its authentic Belgian style waffles (or “wafels”), is set to offer franchise opportunities in quintessential venues within major cities across the nation. Founded in 2007 by Belgian national, Thomas DeGeest and his wife Rossanna Figuera, the beloved brand has operated food trucks, food carts, and now primarily food kiosks in the busiest corners of New York. Legend has it that King Albert II of Belgium was made aware of soggy waffles made from pancake batter sold in diners all over the United States as so-called “Belgian waffles”, thereby tarnishing the name of the nation’s staple dish. This compelled him to mobilize his Ministry of Culinary Affairs, Department of Wafels, to bring back the authentic Belgian “Liege style” waffle to America. He found DeGeest and then knighted him as “Special Envoy for Wafels” and named Figuera as “Ambassador of Good Things.” Running a 1968 Chevy food truck, the couple brought the joy of real “Wafels” and “Dinges” (Flemish slang for “whatchamacallits” or toppings) to the streets of Manhattan.

Relying on centuries-old craftsmanship, such as using a waffle dough rather than batter, and using heavy cast-iron waffle makers, Wafels & Dinges has established itself as the “real deal” when it comes to Belgian waffles.

“At the core of Wafels & Dinges is high-quality, authentic product unlike anything else found in the states. We make our own real whipped cream, and import our chocolate from Belgium and our dulce de leche from Argentina. At every turn we strive for excellence, and our next chapter of franchising will be no different,” said DeGeest. “Our products are an indulgence and, therefore, one of our greatest joys and also the root of our success is Wafels & Dinges’ ability to touch people of all ages and evoke happiness.  This is where our passion lies and why we were inspired to expand the brand via franchising to find like minded partners to help spread the magic of Wafels & Dinges to more communities across the country.”

Wafels & Dinges, which has tapped DCV Franchise Group as their strategic franchise development partner, was designed with a low barrier to entry and projected high return on investment, and is currently seeking passionate and experienced franchisees to expand the innovative concept across the country. With selective location designation at the core of its expansion strategy, potential franchisees can rely on the tried-and-true growth strategies and development options which have the capability of establishing rapid market penetration and high-profile location securement with a focus on high-grossing units.

The key points that make franchising with Wafels & Dinges attractive are:

Caters to all day parts by offering a menu suitable and relevant to breakfast, lunch, afternoon snack, and late Additionally, catering for events and parties is an added revenue stream.
The ability to operate out of small footprint kiosks, typically 150-600 sq ft, which makes securing locations in high-traffic areas more attainable. Existing storefronts include locations in NYC’s Bryant Park, Herald Square, as well as Minneapolis’ Mall of America and Denver,
Low initial investment ranging from $212k – $493k which includes the franchise fee, construction and leasehold improvements, equipment, training, POS systems, and
Unmistakable designs and packaging, kiosks, and menus which attract consumers across all age demographics including Gen Z and millennials, the largest segment of dessert
National brand recognition within the media and outstanding reviews garnered from local and international customers.

“Wafels & Dinges’ innovative operation blueprints, cult-like following, and high-consumer demand are unmatched in the industry. The brand has not only established itself as a game-changing concept, but created a culture which exudes authenticity and approachability by taking an immense amount of pride in its inviting and inclusive philosophy,” said Vince Blumetti, Senior Franchise Development Consultant at DCV Franchise Group. “We are confident that Wafels & Dinges’ unparalleled franchise and overall business model will attract highly-capable franchisees with the know-how to build a presence in thriving markets across the country. With compact locations that are inexpensive to develop and operate, the full 12-month period of 2021 accomplished an astonishing average-unit volume of $900,102.67, maintaining over 30% net profit over the last three calendar years! It’s a no-brainer!”

These authentic Belgian waffles use dough rather than batter and are made using heavy cast-iron waffle makers.

Clinching a victory against celebrity chef Bobby Flay in the popular Food Network series Throwdown! with Bobby Flay, and named “Best Food Truck in NYC” by Zagat and Forbes; “Most Popular Food Trucks” by Buzzfeed; “Al Roker of The Today Show’s Favorite Waffles”; and Jerry Seinfeld’s personal recommendation for the best waffles, Wafels & Dinges has earned a lauded reputation over the past 15 years. In addition to ‘build your own wafels,’ standout menu favorites include Hot Belgian Cocoa, signature wafels including the ‘Bourbon Maple and Bacon’ (candied bacon and bourbon barrel aged maple syrup), ‘De Bom’ (homemade Tahitian vanilla ice cream and warm chocolate fudge), and the legendary victor of the battle with Bobby Flay dubbed ‘Throwdown’ (Spekuloos spread, whipped cream, and Spekuloos crumble.) Spekuloos, which boasts a gingerbread-like flavor in homage to the Belgian Spiced Cookies of the same name, can also be ordered as a dinges, ice cream, and shake.

The dinges (toppings) found on the WMD, or Wafel of Massive Deliciousness, include bananas, strawberries, Belgian chocolate fudge, and whipped cream.

Founded by Belgian national Thomas DeGeest and his wife and co-founder Rossanna Figuera in 2007, Wafels & Dinges has grown from a single food truck to a booming enterprise with locations in some of the country’s most highly-trafficked areas. The brand was built on a mission to re-introduce American diners to genuine Belgian Liège waffles, relying on traditional preparation methods while incorporating playfulness and youthfulness into the brand’s core concept with fun dinges, or toppings, available for menu customization. The industry shaping dessert chain has reinvigorated the market through a dedication to genuine flavors and offerings and a thoughtful philosophy, all of which have garnered a loyal following and an award-winning reputation having claimed victory against Bobby Flay in Throwdown! with Bobby Flay and named one of America’s Best Food Trucks by Forbes and Best Mobile Vendor award from Vendy. For more information about Wafels & Dinges, visit www.wafels.com.