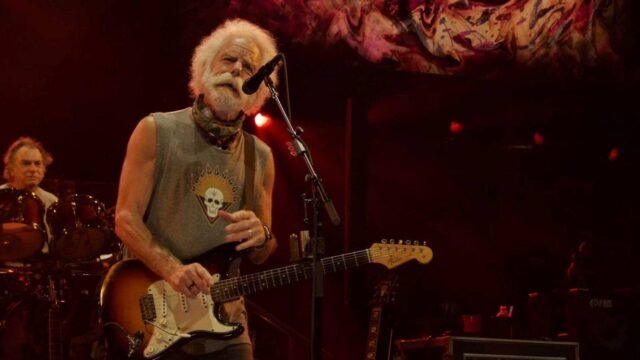 Dead & Company‘s Fall Tour 2021 continued in the Houston area on Friday for a concert at Cynthia Woods Mitchell Pavilion in The Woodlands, Texas. Last night’s show was the band’s first in Houston and the setlist included a number of geographically appropriate songs.

Next up was the fitting “El Paso” played at the Dead & Company 2021 tour stop held closest to the Texas city that gave the Marty Robbins song its name. Bobby strapped on an acoustic guitar for a cover he delivered with strong vocals before returning to electric for the reggae-tinged “Row Jimmy.” John Mayer expertly used the tremolo bar on his PRS Silver Sky guitar during his impassioned solo on the Garcia/Hunter ballad which he sang. “Jack Straw” followed and the crowd reacted with a huge cheer to the “Leaving Texas” lyric. John Mayer filled the ensuing “Mississippi Half-Step Uptown Toodeloo” that closed the set with hard-nosed blues licks in a style more akin to Buddy Guy than Jerry Garcia.

Read on after The Skinny for the rest of the recap and more.

Grateful Fred – Makers of high quality decals, car badges, metal stickers and more. Swing by Grateful Fred to check out all their high-end heady products for the low-key deadhead.

Visit JamBase’s The Skinny Hub
to explore past shows and tours.

Dead & Co. “kept the mother rolling” with “Here Comes Sunshine” featuring John Mayer on lead vocals to open the second set. Oteil Burbridge propelled the song with a deep in-the-pocket bass groove throughout. Burbridge then lit into a funky progression mirrored by Chimenti on piano and Clavinet to lay the groundwork for a tasty jam. A slinky bit of improv moved into the tour’s first “Truckin’.” Once again, the sextet paid tribute to its host city with the song’s “Houston” mention sending the audience into hysterics. The “too close to New Orleans” and “busted down on Bourbon Street” lyrics that followed hit close to home considering the band was supposed to headline Jazz Fest this weekend before the beloved festival was canceled due to the COVID-19 pandemic.

While the band put the focus on songs over the first set and start of the second frame, the “St. Stephen” that followed “Truckin’” came complete with deep improvisation. Burbridge fronted a move outside the song’s normal boundaries into a fusion jam. Mayer then led the group into more jazzy terrain, urged on by Chimenti’s exquisite piano stylings. Oteil thumped up and down the neck of his bass as Dead & Co. connected on the turnaround that marked the return to the final verses of “St. Stephen.” Weir and Chimenti then sang the “William Tell Bridge.” The expected “The Eleven” came next featuring Bobby howling the lead vocals. Another burst of intense improvisation followed before the instrumentalists vacated the stage.

The Rhythm Devils, drummers Mickey Hart and Bill Kreutzmann, started the evening’s “Drums” trip by pounding out bombastic beats. It wasn’t long until Burbridge joined the pair on the drum riser in providing a stronger sound from the rig. All six arms moved in synchronicity as the musicians focused on traditional percussive sounds before Hart was left alone at the Beam. Mickey triggered samples from his vast library while strumming the massive instrument’s strings.

Hart rang out a droning note from the Beam as the instrumentalists returned with Bob Weir wearing a cowboy hat. Last night’s “Space” was particularly noodle-heavy until the drummers emerged for the tour’s third cover of Miles Davis’ “Milestones.” The mood took on a darker feel as Dead & Co. began “Days Between.” Weir did Jerry proud with heartfelt vocals on the evening’s second and final song debuted in 1993 by the Grateful Dead. The six-piece took the energy in a completely different direction next with a high octane “U.S. Blues” yet went the heavy route again for a “Black Muddy River” encore featuring some of Mayer’s most impressive singing of the night.

Dead & Company resumes the tour on Tuesday at Red Rocks in Morrison, Colorado. Head to nugs.tv to purchase a livestream.

Zeds Dead remix Nessa Barrett’s ‘i hope ur miserable until ur...