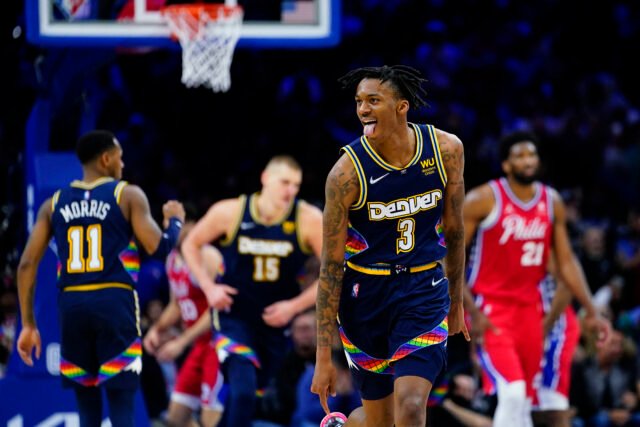 PHILADELPHIA — Bones Hyland dropped his head, and when he picked it up some 20 seconds later, tears were running down his face.

Back in Philadelphia, only 30 minutes from his hometown of Wilmington, Delaware, Hyland’s first visit to the Wells Fargo Center was more than enough cause for his community to come out. Hyland covered tickets for his close friends and family, which amounted to around 20 people.

But the outpouring of love Hyland felt after erupting for 21 points, including four dagger 3-pointers in the fourth quarter of Denver’s 114-110 win Monday night over the Sixers, was enough to ease his grieving heart.

Nuggets coach Michael Malone estimated there were 500 people there to see Hyland. Denver’s precocious rookie guessed the number was more like 600 or 700.

Regardless, and perhaps some myth is a little better in this case, they were all there to lift up one of their own. In March of 2018, Hyland was on the second floor of his family’s home when it caught fire. With four people, including himself, inside, Hyland had to jump out of his bedroom in order to survive. The house fire claimed the lives of his grandmother and his baby cousin. Another baby cousin survived.

Hyland was told by doctors he’d never play basketball again. On his left shoulder, Hyland has tattoos of both his grandmother and his cousin.

Before Monday’s game, Hyland met dozens of first-responders and other members of the Wilmington fire department. They had a personalized jacket waiting for him, emblazoned with his signature logo.

thanks for rescuing me & my family..

When he was asked about his connection with the group after the game, Hyland couldn’t bring himself to answer the question. Being back in front of the people who raised him, that window was too painful to peer through.

But the moment when Hyland rained down four clutch 3-pointers — including three in barely a minute’s time — wasn’t too big for him.

“Fearless,” Malone said. “That’s one word that I would use to describe Bones Hyland.”

In front of a raucous crowd, one that felt exactly like a playoff road game, Hyland launched without abandon. With each 3-pointer, Hyland ratcheted up the celebration. A mid-court flex, a skip, a chest-bump.

“Let the crowd know that I’m here,” he said.

Amid his fourth-quarter run, one three-ball was so deep it might as well have been from Delaware.

“I have the biggest heart,” he said, pouring it out with each successive bucket.

In one instance Monday night, Hyland was encouraging his teammates that a comeback (the Nuggets trailed by 19 in the first half) was possible. In another, he was trying to settle down reigning MVP Nikola Jokic after a shaky first quarter. Hyland’s confidence, in ending Denver’s two-game slide, was infectious.

After watching highlights of Hyland at VCU this past summer, Jokic said he wasn’t surprised at Hyland’s self-assuredness. His joy and his swag, as the rookie describes himself, is just who he is.

Hyland, who also has Delaware tattooed on his forearm, has never forgotten the community that raised him. Every time he sees a VCU jersey in the crowd, he signs it. Every time he sees a fan rocking his signature shirt, he’ll autograph it. When Hyland got drafted by the Nuggets this past summer, a huge smattering of loyalists traveled to Las Vegas to see him make his professional debut.

“When you do good to people, you get good back,” he said.

As Malone said after the game, “Bones travels. Let’s get Bizzy.”

While Hyland was walking off the floor late Monday night, several hundred of his people gathered near the visitor’s tunnel to let him hear it. They rained down support like they’ve done for him his entire life.

“That’s not something I take for granted,” he said.