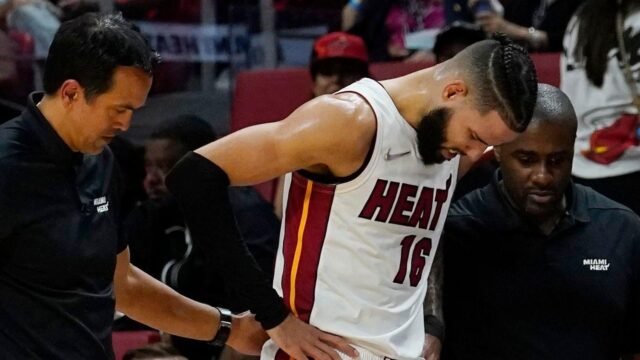 Injured during the first half of the loss to the Phoenix Suns at FTX Arena, Martin did not require an MRI and is listed as questionable for Friday night’s game against the visiting Cleveland Cavaliers.

Martin already had been dealing with a sore left Achilles that had him listed as questionable on recent injury reports. He missed five games in a seven-game stretch in February with that ailment, before returning to appear in the past eight games.

Even with the return of guard Victor Oladipo from an 11-month injury absence, Martin had remained in the rotation, with coach Erik Spoelstra instead shuffling Gabe Vincent and Max Strus into lesser roles.

Martin, 26, began the season on a two-way contract. He then was converted to a standard contract on Feb. 15, making him eligible for the playoff roster. He becomes a restricted free agent July 1, with the Heat able to match outside offers up to their salary-cap limit.

The Heat have 15 games remaining in their regular season, with the visiting Cleveland Cavaliers up next on Friday night. The regular season ends April 10, with the NBA playoffs opening April 16.

Added in the offseason after he was released by the Charlotte Hornets, Martin has made 52 appearances this season, including 10 starts. He is averaging 9.4 points, 4.0 rebounds and 1.1 assists in an average of 22:51, often playing with the closing lineup due to his defensive prowess.

With forward Markieff Morris still sidelined in his recovery from a neck injury sustained in his Nov. 8 run-in with Denver Nuggets center Nikola Jokic, Martin has been one of the few options for Spoelstra as the backup power forward to starter P.J. Tucker. Spoelstra’s remaining options are recently signed Haywood Highsmith, bigger lineups that feature dual big men, or going small, with Strus taking Martin’s minutes in Wednesday night’s second half.

“I mean, one thing you don’t like to see is one of your brothers go down,” center Bam Adebayo said of Martin. “He’s an important piece for us. He does so many things defensively, and he kind of has an offensive game.

“You never want to see one of your brothers go down, obviously, but he’ll bounce back.”

Also listed as questionable for Friday is forward Jimmy Butler, who missed Wednesday night’s game due to sinus congestion.

In addition to Morris, Kyle Guy and Javonte Smart also are listed as out Friday, in their case due to G League assignment.

With the signing of Highsmith, the Heat do not have a roster spot for a Martin fill-in, if needed, already at the roster limit of 15 under standard contract, Guy and Smart on two-way contracts.

Spoelstra explained the reasoning for the signing of Highsmith as a move made with the long view in mind, with the 25-year-old 6-foot-7 forward signed to a three-year contract that includes non-guaranteed 2022-23 and ‘23-24 seasons.

“We really like him as a two-way, offense-defensive player,” Spoelstra said. “He already kind of fits that mold of that 3-and-D guy. He can guard multiple positions. He’s strong. He can guard quicker guys. He can guard bigger guys. And he’s a more than capable 3-point shooter.”

The Heat initially had Highsmith on a pair of emergency 10-day contracts in the wake of the team’s COVID outbreak in late December.

“We’re really excited about having him in the program,” Spoelstra said. “We really liked him when we had him in January, and we were hoping that we’d be able to get something done at the end of the year, and we did.

“He’s been terrific so far, even just being around the guys and developing. And we’re looking forward to having a great summer with him.”

Wednesday’s 111-90 loss to the Suns was the Heat second worst home loss of the season, eclipsed only by their 111-85 Dec. 1 loss to the Cavaliers, Friday’s opponent at FTX Arena.

Also, the Heat’s 55-38 rebounding deficit Wednesday was their third-worst deficit of the season, worst since being outrebounded by 18 in a Dec. 4 loss in Milwaukee.

“Obviously unacceptable,” guard Duncan Robinson said. “We’ve been pretty good about it all year, but definitely a learning experience that now we know that definitely can’t happen.” . . .

In scoring 17 against the Suns, guard Tyler Herro saw his franchise-record streak snapped at seven consecutive 20-point games off the bench. The previous Heat record was four in a row by Chris Gatling in March 1996 . . .

Wednesday was the Heat’s first loss when Robinson scored 20 or more, now 11-1 in such situations, after Robinson led the Heat with 22.