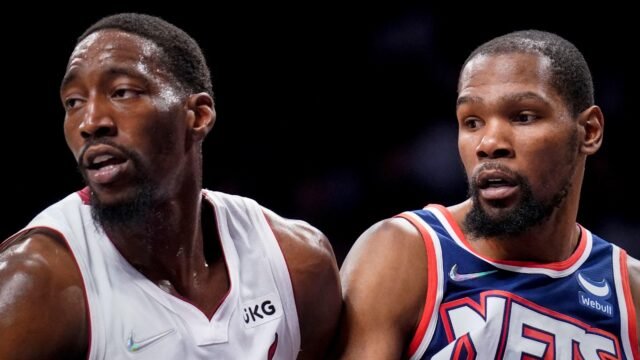 This was before the Brooklyn Nets went into Philadelphia on Thursday night with Kevin Durant and Kyrie Irving and annihilated Joel Embiid, James Harden and the 76ers.

Instead, it was a debate two nights earlier on the same network that carried Nets-76ers, when WNBA star Candace Parker and former Miami Heat teammates Shaquille O’Neal and Dwyane Wade were debating the reality of the Heat finishing as the No. 1 playoff seed in the Eastern Conference only to possibly face the Nets in the first round.

It is a prospect that looms if the Nets finish No. 8 in the East, which is a distinct eventuality: Brooklyn loses the opening game of the play-in tournament and then wins the second.

And it would be a disheartening reality for Erik Spoelstra and his team, no matter the best face put forward.

It also would hearken memories for the Heat of the 1999 opening round.

That season, the New York Knicks by season’s end were far more talented than a No. 8 seed, but a fractured heel and lengthy injury absence for Latrell Sprewell left them as just that. It also was a season Pat Riley’s Heat finished as the No. 1 seed. An Allan Houston jumper later, in the winner-take-all final game of the opening round, and it was over for the Heat. Arguably the most devastating moment in franchise history.

This season, it has been Durant missing time similar to Sprewell, in this case a knee injury, plus Irving’s ban on home games due to a vaccine rule likely to be lifted by New York City in advance of the April 16 start of the postseason. And Ben Simmons, who did not even play Thursday in Philadelphia, also looms as a Brooklyn lineup boost.

So there they were, in the TNT studio — Parker, O’Neal and Wade — debating whether another Heat first-round nightmare could be looming.

Parker: “This is not a matchup that Miami wants to see in the first round.”

Shaq: “Miami wants all that smoke, cut it out.”

Parker: “Miami does not want Brooklyn in the first round.”

Parker: “Miami does not want Brooklyn in the first round.”

Shaq: “Yeah, they want the smoke.”

Parker: “But you don’t want Brooklyn.”

Wade: “You don’t want Brooklyn in the first round.”

Shaq: “They want all that smoke. They ain’t scared of nobody.”

Parker: “Nobody said they were scared. You don’t want to play Brooklyn.”

Wade: “You want to play KD and Kyrie in the first round?”

Shaq: “I want all the smoke. I’m the chimney man.”

Shaq: “I’m just trying to show the Heat some respect, because they really don’t get a lot.”

Of course, if the Heat do hold on to the No. 1 seed, a Brooklyn victory in the No. 7-vs.-No. 8 play-in game would lock Brooklyn into the No. 7 seed and an opening best-of-seven against the No. 2 seed.

The issue there is that if Toronto remains at No. 7, Ontario rules might still be in place that ban an unvaccinated Irving from participating in the play-in round opener.

The perfect world, one that would provide wiggle room for the Heat, would be the Nets vaulting the Cleveland Cavaliers for No. 6, assuring a first-round meeting with the No. 3 seed.

But time appears to be running out there, even with Jarrett Allen sidelined for Cleveland. There simply are too many remaining Nets home games, games that still could mean no Irving at Barclays Center.

And it’s not as if any funny business on closing night of the regular season on April 10 could necessarily provide an escape hatch at the top of the standings, with the No. 7 seed not to be known until two days later, when the play-in round opens.

So, yes, there likely will be Shaq-like bravado from the teams at the top of the East, plenty of “Bring ‘em on.”

But there also is a trap door potentially awaiting, one that could be similar to the stunning silence of that Allan Houston moment at Miami Arena 23 years ago.

For the Heat, even as spectators, the play-in round could well define their season.

Either that, or the audacity of Shaq will have to permeate Erik Spoelstra’s locker room for two unexpected weeks at the end of April.

LITTLE EXTRA: If it seemed as if there was a little extra coming from the Phoenix Suns in Wednesday night’s victory at FTX Arena, that’s because there was a little extra. Guard Devin Booker said the Suns’ 123-100 home Jan. 8 home loss to the Heat still resonated. “We wanted this one bad, to be completely honest,” he said. “We have a lot of respect for their team, especially for what they did to us in Phoenix. We just wanted to prove a point. They’re playing the best basketball over here in the East and we’re doing the same in the West, so it was a heavyweight matchup.” And practically a TKO, in light of the Suns’ 111-90 romp.

AGING OUT: At 28, it appears Josh Richardson has found himself aged out of the San Antonio Spurs’ rotation. Attached as salary to the draft picks acquired from the Boston Celtics at the trading deadline for Derrick White, the former Heat guard has been held out of five games since joining the Spurs on Feb. 10. “I’m the big bro around here,” Richardson said, according to San Antonio’s Express News, with only Doug McDermott, 30, older on the Spurs’ roster. “This is new for me, being one of the oldest guys on the team.” As recently as 2017-18 and ‘18-19, his final two seasons with the Heat, Richardson had started all 154 of his appearances. “A lot of it is mental,” Richardson said. “When you’re not playing every day, it’s easy to get down on yourself and start blaming other people and start thinking of dumb excuses.”

SECOND CHANCES: To a degree, the Heat may have extended Nik Stauskas’ NBA career with the emergency 10-day contract they extended in December amid the team’s COVID outbreak. From there, a renewed Stauskas returned to the G League, where he scored 100 points over a two-game span with the Denver Nuggets’ affiliate and then landed a two-year contract with the Celtics. “I was ready to give in, to be honest,” the 28-year-old 6-foot-6 guard said, according to the Boston Globe. “Just playing in the G-League all year. I had told myself that if it didn’t work out this year, that I’d be OK with walking away from the game. . . . It’s been a long time coming for me, personally, just to kind of get back to this point, kind of cracking a roster.”

PERSEVERANCE CITED: Having guided Victor Oladipo for part of last season, Houston Rockets coach Stephen Silas said he was heartened by Oladipo’s comeback with the Heat. “Obviously, for Victor, it’s great for him, after everything he has been through, the injuries. It’s like one after the other,” Silas said before Monday night’s game at FTX Arena. “He’s competitive. He wants to do things the right way. He is a fighter. For him to fight through all of the injuries that he has had and manage the ups and downs, the emotional part of what he’s been through is admirable.”

$290,000. Heat guarantee to forward Haywood Highsmith for the balance of the season, based on the three-year contract he signed with the team this past week. Highsmith also has salaries of $1.8 million and $1.9 million for the non-guaranteed final two years of the deal, with various trigger dates further guaranteeing part of the contract, if still on the roster.